On Edge – So many questions

So, you buy a new pair of skis….. Or, you have a set of used skis re-ground / new base grind at a ski shop.

The very first question “How do you want your base and edges?” What you say…..

A lengthy [persuasive] discussion might ensue leading to a wrong or right decision in the end.

For GS [Giant Slalom] and SL [Slalom] Skis ONLY (SG Tuning will be discussed in the tech section)….

Per USSA ATS [Alpine Training System] Under Equipment for Phase 4 [Age 11-15 yr old] this is the stated answer as well….. 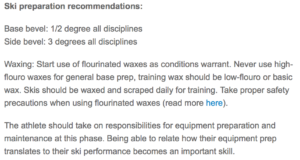 REMEMBER!!! you can only take Base Bevel OFF…. not put it back on!!!

Meaning: A fresh Base grind of a Ski is “0-ed” out…. the base edge is flat. After the ski comes out of the machine [some can set basic edge angles now (limited to a few ski resorts), a tech will take a Base Bevel Guide to the base edge and set the bevel with a file, then polish with a stone, etc. The “sharpest” base bevel starts at .5 (some WC custom tools go below this (more in the Tech section). The next “sharpest” is .7 or, .75, then .1; incrementally, for each larger base bevel [less sharp], more material is taken off with the file. If you wish to “experiment” with base bevel angels, start with the LEAST (.5 deg) and have more material taken off if needed (go to .75), etc. IF you start with .75 as a base bevel and can not hold an edge on Ice / Hard pack, the ski tech is going to explain that a complete new base grind will need to happen in order to get you a “sharper” [lower base angle]…. this is expensive, time consuming, and time intensive [hot box wax cycle, etc] In general, a base bevel or .5 [or lower angle] will engage quicker, hold an edge much better in hard pack, and track better on ice; the down side is (potential) easier to “catch an edge”, harder to disengage edge hold in turn, and causes more friction (slower) in certain snow conditions.

Once the base is set don’t mess with it for the season. Severe damage (rock damage) might require a new re-grind of the base and new base bevel to be set. Otherwise, basic polishing and care are all that is required.

Unlike Base Bevel, the side edge is easier to set, and re-set [AKA experiment with]. You will still end up taking off material, but, this is minor and does not effect the base of the ski. Eventually, you will need to remove sidewall material to expose more “steel edge” (after you file off enough of it); this is called sidewall planing. However, if you don’t have the time, or interest to experiment, set the GS and SL side edge at 3 deg. (this is also know as a 87 deg). Once the side edge is set, put away the file [unless edge damage repair is needed] and use a DMT or Moonflex Diamond 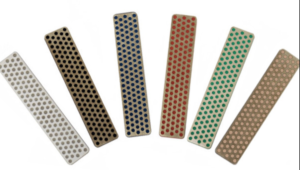 to polish the side edge (using an 87 deg edge guide and spring clip). A 100 grit followed by 400 is all that will be required [typically Black / Yellow / Blue]. Sharpen edges before race day, and (ideally) before each practice. Remember: Train like you race…. 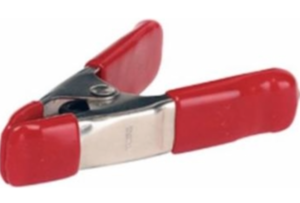 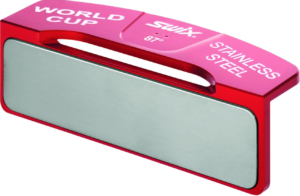 A side bevel of 3 is “sharper” then 2, or 1, etc….. Bigger the number, the “sharper”…. however, base and side  angles interplay in how they feel on snow. Meaning, a change to one will change the feel on the other side. My experience is that side angles over 3 (4/5) tend to be “hook-ie”, grab, annoying, just don’t “feel right to me”…. but, to each his own.

Extremes do exist: Bases of 0 deg. for SL, .2 or .3 Deg for GS at the WC level, Side Edges of 4, and 5 deg. for SL…. As with everything, the individual will become very particular about edge setup in certain course conditions, transition of Tip /Tail / under binding edges [Tune / de-tune], etc. 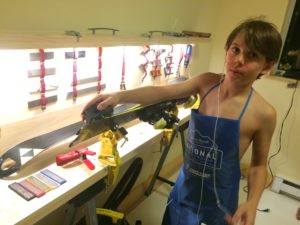 (I don’t ask what he listens to or, what he has on under his apron when he tunes)

As a parent / wing-man, pit crew, etc, all this can be a fun experience that can be done together as you learn more about the sport and customizations that lead to speed!